Fate/Apocrypha, https://www.youtube.com/watch?v=jPEqcOosGPU: the setting is a parallel world to Fate/stay night where the Greater Grail mysteriously disappeared from Fuyuki after the Third Holy Grail War. After many years of silence, around the same time as the Fifth Holy Grail War would have happened, the Yggdmillennia, a family of magi, openly declares their secession from the Mage’s Association, and that they are in possession of the Grail. The Association dispatches fifty magi to retrieve it, and all but one are instantly slaughtered by a mysterious Servant. The one remaining manages to activate the reserve system of the Greater Grail, allowing for the summoning of fourteen Servants in total. 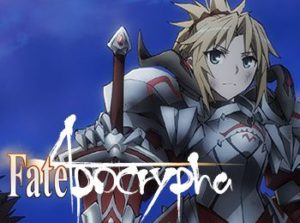 In the city of Trifas, two factions will fight for the control of the sacred relic, each of them possessing their own team of seven Servants: the Black Faction whose members are part of Yggdmillennia, protecting the Grail, and the Red Faction whose members were sent by the Mage’s Association, trying to take the Grail back. For an event of this scale, the Grail itself summons its own Servant, the holy Ruler, to oversee the conflict.

Subscribe to our newsletter and receive a bonus video in your inbox the same day the book officially ships. A veteran vendor spills her secrets about her merchandise, display setup and pricing to help new vendors rocket to a fast start. This is one bonus video you’ll be glad you watched.