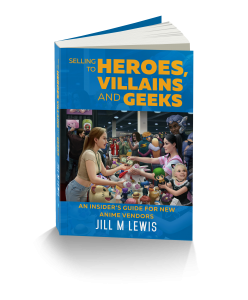 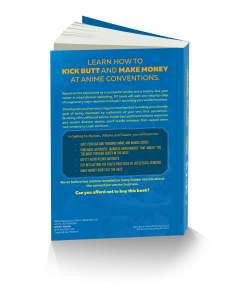 “This book provides a comprehensive guide to becoming a vendor at anime, comic, and sci-fi conventions.”

“Lewis writes with an enthusiasm for her subject in a style that is breezy, informal, and a joy to read.”

“Her merchandising expertise and knowledge of the subject matter shine through as she delivers on the promise of the volume’s subtitle, An Insider’s Guide For New Anime Vendors.”

“Engaging, well organized and deftly written; a treasure trove of valuable information for those who want to sell at specialized conventions.”

For full review, go to Kirkus Reviews for Selling to Heroes, Villains and Geeks.

“… Selling to Heroes, Villains and Geeks is packed with no-nonsense tips, tricks, and techniques.”

“… A “must-have” for any businessperson seeking to break into potentially lucrative pop culture convention sales!”

For full review go to Midwest Book Review of Selling to Heroes, Villains and Geeks, and look in “The Business Shelf” section.

“… a well-written, interactive and highly accessible format, information, strategies and instruction that can help new vendors supply, design and set up a dynamic, unique and successful anime display.”

For full review, go to ReadersFavorite.com’s review of Selling to Heroes, Villains and Geeks

“Selling to Heroes, Villains and Geeks is beautifully laid out in easy-to-follow chapters with insightful comments on what to do and what not to do, with personal examples of vendor failures and successes. Lewis divides her book into three parts: The Cardinal Rules, Business Battle Plan Blueprint, and Initiate Launch Sequence.  Each section propels the reader forward until they are ready to launch their own booth as a vendor.”

“Though definitely a niche book, Selling to Heroes, Villains and Geeks appears to be the only one of its kind on the market, and given its easy-to-follow information, it promises to be the go-to book for anyone interested in the field. For those looking to sell to anime fans, this book isn’t just a good option, it is a must-have invaluable guide.”

For full review, go to San Francisco Book Review for Selling to Heroes, Villains and Geeks 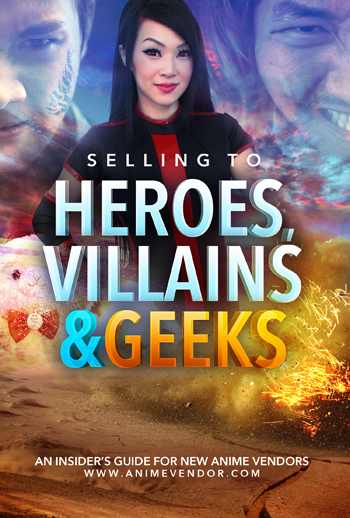 An information-rich book that steers you through every critical step from sourcing your merchandise to ultimately meeting your goal of being swamped by customers at your very first convention. Bursting with unfiltered advice, insider tips, pertinent website resources and vendor disaster stories, you’ll hurdle mistakes that caused other new vendors to crash and burn.

6 REASONS TO READ THIS BOOK

The book is divided into a 3-part journey

Road Map To Your First Convention 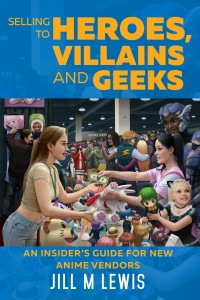 Alas, no mutant powers ever materialized. But she did discover her power to earn an MBA from Columbia University and turn into a high-performance marketer. Mere mortals, like Jill, could change the future with smart, creative, customer-focused marketing plans. For twenty-five years, she launched products that rocketed to success, developed memorable advertising campaigns, and guided businesses that generated hundreds of millions of dollars in annual sales. And she went on to fly all over the world without the assistance of any mutant powers. She conducted business in London, Paris, Frankfurt, Geneva, Milan, Tokyo, São Paulo, Beijing, Hamburg, Barcelona, Johannesburg, Toronto, Mexico City, Prague and every state in the US.

For the past several years, Jill used her marketing powers to vend at anime, comic and sci-fi conventions. Her customers are heroes, villains and geeks who use their creative powers to bring their favorite characters to life with a little help from her merchandise. She knows what piques their interest and opens their wallets or purses. Jill can even get Moms and Dads to pitch in several bucks – it’s not easy being the parent of heroes and villains. And this all of this has helped Jill become a strikingly-successful vendorpreneur.

Subscribe to our newsletter and receive a bonus video in your inbox the same day the book officially ships. A veteran vendor spills her secrets about her merchandise, display setup and pricing to help new vendors rocket to a fast start. This is one bonus video you’ll be glad you watched.